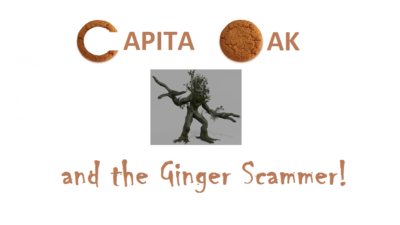 In the Capita Oak pension scam, the “Ginger Scammer” – XXXX XXXX – is reported to have earned over £200k in transfer/administration fees alone. It is not known how much he earned in investment introduction commissions.

The Ginger Scammer can afford to stump up some cash for the benefit of the victims of the Capita Oak and Henley Retirement Benefit Scams. Over a thousand victims are facing the partial or total loss of their pensions and are also now being pursued by HMRC for tax liabilities on the Thurlstone liberation “loans” operated by XXXX XXXX

Here is the email sent to the lawyers acting for XXXX:

I am setting out below the redacted tax appeal in respect of “Mr. X”.  He had the largest transfer in Capita Oak – and by definition the largest Thurlstone loan (operated by XXXX XXXX and Tom Biggar) and resulting tax demand.
Mr. X’s case was the subject of a Pensions Ombudsman’s determination where Capita Oak was clearly stated to be a scam.   Undoubtedly the Ginger Scammer is familiar with the Ombudsman’s determination: https://www.pensions-ombudsman.org.uk/wp-content/uploads/PO-3590.pdf
Further, I am sure you have seen the FCA sanction against IFA Popplewell:
http://www.international-adviser.com/news/1035260/uk-ifa-banned-advising-clients-invest-gbp12m-storepods?utm_source=Adestra&utm_medium=email&utm_term=&utm_content=UK%20IFA%20banned%20over%20advice%20to%20invest%20%C2%A312m%20in%20Storepods&utm_campaign=international_adviser_newsletter_10_04_2017
£128 million worth of pensions investments is an awfully big number and I am sure that after all the money your client earned out of these scams, he can come up with sufficient funds to place in a secure account for the benefit of the victims who are now being pursued by HMRC for tax on the Thurlstone “loans”.  Although it is a matter of public record that XXXX earned well in excess of £200k in transfer fees in Capita Oak alone, it is inevitable that he will also have received some introduction commissions.
The Thurlstone loans were operated by XXXX XXXX and therefore he must take responsibility for the tax liabilities on behalf of the victims.  Can you please both get back to me by return.  Ignoring this situation and turning your back on the Capita Oak victims is not an option.
Regards, Angie
——————————————————————————————————————————————————-

Please accept this as the appeal and request for postponement of the tax sought by HMRC on behalf of the above-named taxpayer in respect of the protected assessment issued.  The grounds are as follows:

2.       Capita Oak was also registered by the Pensions Regulator (PSR12006487) who had placed Ward’s Ark schemes in the hands of Dalriada Trustees – yet allowed him to register a further scheme with no regard to the risk that it might be a scam (as indeed it was).

4.       This taxpayer – along with 300 other victims – was given the Thurlstone loan on the basis it was definitely not taxable by an individual who purported to be a financial adviser.  Had the victim known this would be treated as an unauthorised payment, he would not have gone ahead with the transfer.

5.       The Thurlstone loans were processed by two CII members practising as financial and tax advisors. They would have known there was a risk the loans would constitute unauthorised payments and result in tax assessments by HMRC.

6.       Once the transfer request had been signed by the victim, there was nothing further he could have done to influence any further transactions since these would have been outside of his control.  The trustees, Imperial, and the Thurlstone loan company were by now in total control of the transfer, investment and loan.  The victim had zero input or influence over what happened subsequent to the transfer being executed by the negligent ceding providers.

7.       There appears to be no evidence whatsoever that Capita Oak was set up for the purpose of providing an income in retirement for the members.  It must be questioned, therefore, whether it even constituted a pension scheme at all – save for the valid HMRC and tPR registration numbers.  As supported by the Insolvency Service’s witness statement, the following are compelling reasons why this was a bogus pension scheme from start to finish:

·         The sponsoring employer – R. P. Medplant Ltd did not exist – although there was a company registered in Cyprus called R. P. Med Plant Ltd (which was also used for the subsequent Westminster scam).

·         The scheme was set up purely as the “super fund” of a bunch of known, serial scammers, to earn investment introduction commissions of 46% out of Store First’s store pods

·         The scheme’s own bank – Barclays – didn’t know it was a pension scheme – and when Barclays eventually realised this, they blocked the account

·         No arrangements were ever made to communicate with the members.  Once the various scammers in their respective roles had earned their fees and commissions, they all simply walked away and abandoned the scheme and the members

·         The transfer administration was carried out by Stephen Ward, Level 6 qualified CII and author of the Tolleys Pensions Taxation Manual.  After the disasters of both Ark and Evergreen, Ward would have known he was condemning all the victims – whether transferring from personal or occupational pensions – to certain financial ruin and potential unauthorised payment charges

·         The unauthorised payment charges arose from the Thurlstone loans and the tax should, therefore, be sought direct from the extremely wealthy scammers – not from the victims of the large-scale Capita Oak scam.