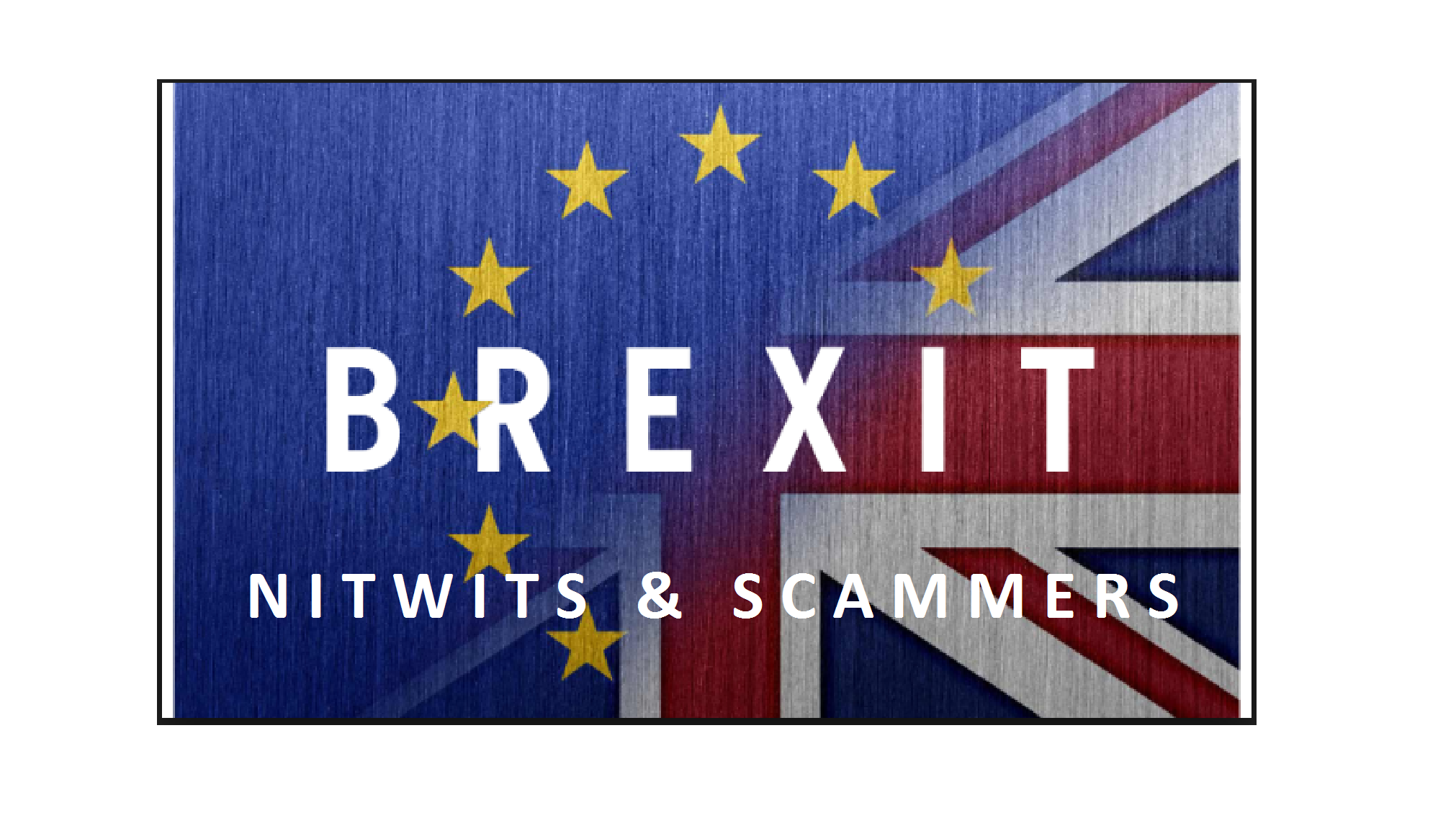 The Nitwits were out in force this week.  Brexit – like any other real, potential or imagined crisis – provides wonderful opportunities for pension scammers.  Put people into a corner; wrap them in fear and uncertainty; set semi-literate politicians against each other; and carve out a nifty niche to scam away with deadly precision. 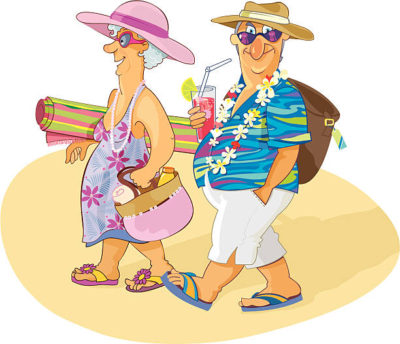 “Move all your money, assets, pensions, silk stockings and chocolates to Spain/France/Portugal/other European expat destination.  Don’t let the British institutions look after your hard-earned life savings – let us at Jolly Johnny Rotten Stealth Management “look after” it all.  And then you will develop perfect white teeth, silky grey hair, a perfect figure and a golden beach to trot happily along like a thoroughbred with your equally handsome partner for the rest of your life.”

My thoughts on pension scammers are well known – and I must have written thousands of words about the likes of Stephen Ward, XXXX XXXX, David Vilka, Darren Kirby, Peter Kenny et al.  But almost as bad as the scammers are those who call the victims “stupid” and “greedy”.

Usually, I manage to rise above such rubbish – as these people “know not what they say”.  But the other day one such nitwit crawled out of the woodwork on a Facebook forum called British Ex-Pats in Spain. Rejoicing in the name “Ralph Ehlers” this geezer seems to be good at multi-tasking having founded a variety of businesses involved in legal stuff, crowd funding, startups, contracts, investing, insurance, network technology and web design – and he also finds time to be in a relationship.

This self-professed expert on everything from law to IT (and probably tights and Mars bars) gave a stern warning:

“The increasing possibility of a no-deal Brexit is causing much angst among British nationals living in Spain.

• If you have bank accounts, savings or investments in the UK, consider moving them to Spain now. Sterling may drop suddenly in the case of a no deal exit; there may also be temporary problems moving money in and out of the EU. 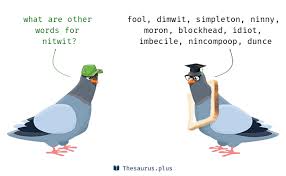 • If you have a personal pension in the UK (this doesn’t apply to state or public service/occupational pensions) and have not yet retired, think about getting advice about how to deal with this and cashing it in if you’re old enough, or moving it. There may be issues with the rights of UK insurers/financial services providers to operate in the EU without having a formal presence there after Brexit and these could cause problems e.g. with insurers making payments to those living outside the UK. Write to your insurer/private pension company in the UK to ask them what plans they have put in place for post-Brexit scenarios”

I suggested that this nitwit ought to be careful about scaremongering people right into the clutches of the pension scammers:

“Please be very careful about encouraging people to panic and move their British pensions. Spain is full of pension scammers who will love to stick thousands of victims in QROPS they don’t need, insurance bonds they can’t afford an expensive, high-risk investments which will destroy their funds. Thousands of Continental Wealth Management victims wish they had left their pensions in the UK where they were safe from these criminals.https://pension-life.com/continental-wealth-management…/”

“Good that you pointed out how stupid people are to sign up for something they cannot afford. Guess they have timeshare as well.”

And not content with just demonstrating what a jerk he is, he continued to press the point home:

“You obviously made it your purpose in life to hunt pension scammers. Is that motherly instinct or didn’t they give you a job in the fraud squad? Back to the thread, which you use now for a completely different reason. I am sure that there are a lot of people valuing your advice, but we are chatting about general “getting your finances in order” not about pension fraudsters. I am sure there is a thread for it somewhere.”

Anyway, on a lighter note, I had a nice chat later in the week with a nice man called Des Cooney of Axis Strategy – an advisory firm in France.  Kim had called him to ask if Axis Strategy had a license to provide investment advice.  Mr. Cooney (we never quite made it to first name terms) wasn’t terribly enthusiastic about being asked such an “intrusive” question.  He said that his firm didn’t provide investment advice – only pension transfer advice.  So, I read him the home page of his website: 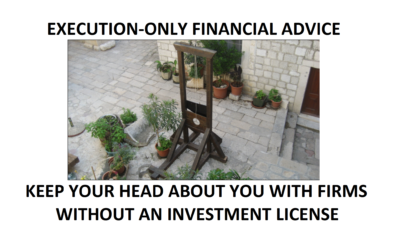 Seriously, I was only trying to be helpful.  He pointed out that it didn’t mean that the firm was advising clients on what to invest their pensions in – but to try to make friendly suggestions as to how they should make their own decisions as to how to choose investments.  And that Axis Strategy’s service was “execution only”.

Anyway, once I had turned my hearing aid down a notch or two, and I had explained I didn’t have a police uniform, we got along just fine.  I do hope that he changes the wording on his website – perhaps I could introduce him to my new friend Ralph Ehlers who does web design. 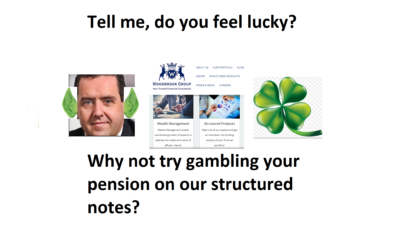 Talking of friends, one of my best mates – jolly Micky Doggerty from Woodbroke Grope, is getting rather a lot of attention on Twitter (and not in a good way).  In fact, while pension scammers normally go after unsophisticated, low-risk, naive investors, Tricky Micky has gone for experienced investors – and they are not amused.  In fact, they want him jailed for fraud.

https://twitter.com/search?q=%24WDBG&src=typd&lang=en
https://twitter.com/michael01884562/status/1081722806491140102
https://twitter.com/michael01884562/status/1081720544695861255
Micky did a “reverse split” to raise the value of the shares in Woodbrook Group in the US by reducing the number.  His little trick does not seem to have gone down well with the investors.  This well-known and much despised (and illegal) manoeuvre is also known as “pump and dump”.  Funnily enough, that rhymes with “chump”.
Maybe I’ve made enough friends for one week.  Later this week I’ve got to deal with Forth Capital’s lawyers.  Then I’m off to Malta with my bucket and spade (and shovel).  No rest for the wicked!

3 thoughts on “BREXIT AND THE NITWITS”