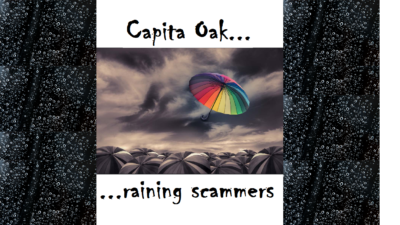 This is a letter I wrote to XXXX XXXX´s solicitor back in April 2017.  It was ignored.  Of course.

I am now preparing the appeals for the Capita Oak victims against the tax assessments issued by HMRC in respect of the 5% Thurlstone “loans” which are being treated as unauthorised payments.  What I require is full disclosure as to the exact source of the funds for these payments.
My problem is that there is scant evidence along the audit trail to be able to prove exactly where the loans came from and I need to be able to establish that the money did not come from the pension funds – if possible.  Indeed, from the point of transfer, pretty much every penny is accounted for as the money passed through the various scammers’ hands from the ceding providers to Metis Law solicitors.  Along the way, some fees were paid out as summarised by the Insolvency Service:

“£100,873 paid to Metis Law on behalf of Hawkshead Properties in lieu of fees due to NATIONWIDE BENEFIT CONSULTANTS

£83,485 Paid to WJP Admin and Copeland South for Bill Perkins

No fee payments were made direct to NATIONWIDE BENEFIT CONSULTANTS but in addition to the payment made to Metis Law on behalf of Hawkshead Properties a payment of £100,558 was made from funds held by Metis Law to THURLSTONE on the instruction of Karl Dunlop who told me who the person was behind Thurlstone (XXXX XXXX) – the “Ginger Scammer”).”

The £10.8 million worth of pension transfers is fully accounted for on its way from the victims’ original pensions through the hands of the scammers.  We now have hard evidence as to who was operating the Thurlstone loans – as had been stated by Karl Dunlop when interviewed by Len Fenton of the Insolvency Service.  So where did the loan money come from?

It would be much appreciated if the operators of Thurlstone would provide this information as it is required for the tax appeals immediately, and will also be needed for the Tax Tribunals in due course.  As the individual behind Thurlstone also runs a company called Nationwide Tax Administration, I have no doubt he will appreciate the seriousness and urgency of this matter for which he is responsible:

I have asked whether the individual behind Thurlstone (XXXX XXXX) could repay the £201,431 he received from the Capita Oak scam so that it can be used for the benefit of the victims.  Undoubtedly, this “gentleman” will appreciate the distress the 300 victims are experiencing now that on top of fearing the total loss of their pensions, they have just received tax demands from HMRC because of the Thurlstone loans.

There isn’t time to tip-toe around this issue as we only have about three weeks left to appeal the tax assessments.  It would be really good to see some degree of honesty, honour and decency after all the nefarious conduct of the past four years in the Capita Oak matter.