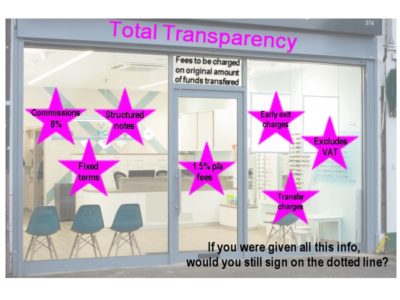 The financial services industry has failed with flying colours to achieve transparency – both offshore and in the UK.  The single most important thing about any product or service is transparency – aka honesty.  This is where the profession has tolerated – and even encouraged – bare-faced lying for years and continues to do so today.

There is nothing intrinsically wrong with overcharging – as long as the overcharger makes it clear he is openly trying to rip his customers off and the victim is consciously happy to be ripped off.  Personally, I’d love to be able to sell my car for 25,000 EUR – but with its age, condition and mileage I know I’d struggle to get 5,000.  However, a crafty, clever person could give it a makeover, a clockover, tell a few convincing porky pies – and some poor fool might pay over the odds for it.

Most of the victims I deal with tell me the same story:

Most people describe their offshore adviser as being about as transparent as a pork chop and the “flying colours” of their achievements to be fifty shades of brown.

Champion campaigner against this sort of dishonesty is international king of transparency Andy Agathangelou – Founding Chair of the Transparency Task Force, the collaborative, campaigning community dedicated to driving up levels of transparency in financial services around the world. Andy writes for Investment Week and calls for total transparency from offshore advisory firms.

One of Andy’s key statements is: “the financial services industry as a whole has a moral, ethical and professional duty to behave transparently”.  But I wonder if that is a bit like asking for World peace, an end to pollution, a cure for cancer or a reversal of global warming (and a solution to the Brexit problem).

In the UK, advisers are not allowed to charge commissions on the products they sell, meaning that they will (hopefully) choose the best investment for their client – as there is no financial incentive to chose one product over another. However, offshore advisers do not have these restrictions, meaning that when they are selling an investment they will inevitably choose the one that pays the most commission.

But are things really that squeaky clean in the UK?  Does the “beady” eye of the FCA have any effect or is it merely a masking mechanism to cloak lack of transparency (aka lying) in a thin veneer of false security?  Henry Tapper’s recent blog on the subject of the FCA’s investigation into 34 firms suspected of non-disclosure of investment charges reports: 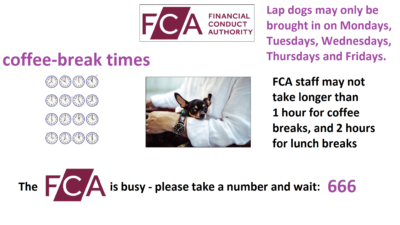 and quotes SCM Direct as saying “Its time for the chief executive of the FCA, Andrew Bailey, to demonstrate that he is willing to be the industry enforcer rather than the industry lapdog.”

One example was cited: Canaccord Genuity claimed its annual management fee was 1.25% plus a transaction commission of £30.  But it turned out the 1.25% was just the beginning – then there were VAT and fund charges bringing the true cost nearer to 2.75%.  Now, I know we women sometimes stretch the truth when it comes to our age, weight or clothes size – but Canaccord’s porky pie was that the real charges were actually twice what was claimed.  That’s not just lack of transparency – that is naked dishonesty.

I had a browse through Canaccord’s funds and got bewildered by the range of costs – the annual charges seemed to range from 2.1% up to a whopping 4.34%.  I’m just wondering whether an investor prepared to pay 4.34% for one of these funds might like to buy my car as well?  After all, if they can throw their money away so easily, they surely can’t be bright enough to realise my rusty old heap isn’t worth 25k.

While I was in a browsing mood, I thought I’d have a wee look at Flying Colours.  The company aims to provide super low-cost advice and investment funds and “negate the hidden costs in the market”.  The website claims “I’m building a network of independent financial advisers with a shared vision – to improve the returns of UK investors. Join us.”  But now I’ve got alarm bells ringing: a network?  And who exactly is in the network?

A list of firms scattered across England from Bristol and Godalming to Liverpool and Skelmersdale – plus a few one-man bands.  But they all claim to be “independent” financial advisers.  How can they be independent if they are tied agents of Flying Colours?  We are back to the “Wild West” offshore culture where members of a network are effectively “feral” and get up to all sorts of mischief due to lack of independence.  And let us not forget that tied agents are illegal in Spain – and for good reason because the Spanish government knows that advisers simply cannot be independent if they are tied to one provider.

But how on earth does a coherent and effective compliance function work with 18 different firms scattered all across the country?  (All of which are lying about their independence).

The Flying Colours website boasts: “We’re transparent about the charges you’ll pay for advice and investments. And there’ll be no hidden fees, ever.”  But where are the fees and charges?  I searched the whole website but couldn’t find out what they were.  Because they were hidden.

Flying Colours recently made an ill-fated, abortive attempt to enter the offshore market (leaving considerable embarrassment and expense in its wake).  Far from the claim of “starting strong relationships with a cultural fit and starting friendships“, Flying Colours ended up dumping the failure and retreating to UK-based “DIY” advice.  Once Flying Colours’ offshore mess is cleared up, there will – no doubt – be a sigh of relief since Flying Colours was actually offering a more expensive version of the “cheap” investment advice process at 2% for investors with complex investments (so back to the same old, same old offshore “sophisticated” confidence trick).

What is there in Britain to protect consumers from lies; scams; lack of independence and transparency; weak compliance and unworkable investment offerings?  Forget the FCA – they are permanently on a coffee break.

But what about the Insolvency Service?  Isn’t that there to help protect victims from investment scams?  More than a year ago, the IS commenced winding up proceedings against Store First for selling store pods to rogue SIPPS providers such as Berkeley Burke, Carey Pensions, Rowanmoor Pensions, London & Colonial and Stadia Trustees.  So, we have thousands of victims of pension and investment fraud all left hanging – not knowing whether their investments are worthless or not.  And this, of course, includes the Capita Oak and Henley scheme victims.

The lack of transparency about the store pods was, arguably, not the fault of Store First itself, but caused by the lies of the rogue promoters and “advisers” and the negligence of the SIPPS providers.  A store pod is a great investment if the investor has a burning desire to invest in an illiquid, speculative asset – with the added benefit that he can also put his granny’s knick-knacks in there free of charge.  While any honest adviser would have told the investors to invest their life savings in a low-cost, liquid, prudent fund – and any competent pension trustee or administrator would have refused to accept store pods as pension investments – the fact is that the backhanders set aside any common sense entirely.

Personally, I think the UK has a long way to go before it can claim to be entirely transparent.  To get there, some sort of regulator would be helpful (forget the FCA – obviously) and an effective insolvency service would contribute to achieving meaningful reform.  But while firms are still lying, obfuscating and cheating, we can’t really say that pension and investment scams only happen offshore.  They are still very much on our doorstep.

Andy Agathangelou’s important work addresses many of the ills which blight offshore financial services.  But he could do with a team of several hundred helpers to cover all the key expat jurisdictions.  Offshore advisers – as well as UK-based firms – need to be 100% committed to their clients and take into consideration the future of the investments they make. They need to give their clients total transparency, not just on the commissions that will be applied but also on all other fees and charges.

Total transparency on all fees and commissions, before any transfers are made, would mean investors know exactly what they are getting into. The truth, the whole truth and nothing but the truth, is needed from day one! But it would also be exceedingly helpful if ALL UK-based advisers and fund managers adhered to this model.

Going back to Canaccord Genuity’s opacity in the case of a client with a £700k portfolio, their non-disclosure of the VAT charges alone led to an additional cost of £10,500. £10,500 over 10 years amounts to £105,000 – quite a sizable chunk of the fund. You would have to have some very good investments to cover these costs AND increase the amount of the fund. Which, of course, is (or ought to be) the main aim of an investment! 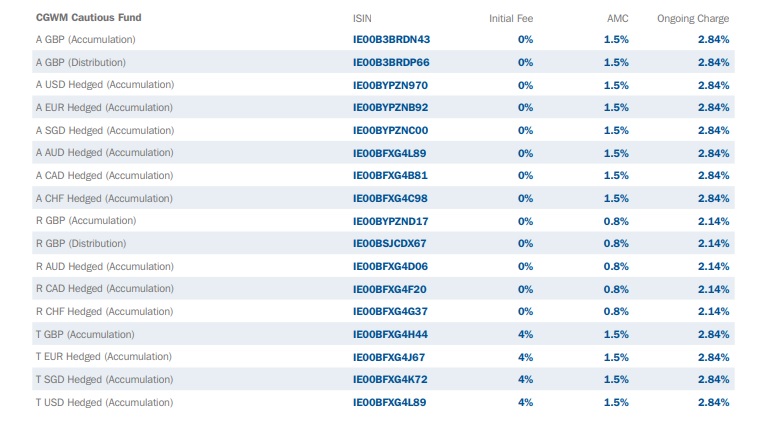 Just for a laugh, have a look on Canaccord´s website at their list of fees, in particular, their cautious fund.  4.34% a year in charges.  I wondered if this included VAT (being a “cautious” investor!).

So I decided I´d give them a call, just to clear up the confusion.

I was passed around various departments and ended up talking to a woman, who was – to put it plainly – pretty unhelpful. I asked about the charges and was told I would need to talk to a fund manager. I was asked how much I wanted to invest. I replied I´d need more information before I could commit to an amount. I was told there was a minimum investment of £250,00, but she still couldn´t tell me about the fees and charges.

I was put on hold, after she implied she might find out the answers to my questions.  However, she must have forgotten me as no one came back and I was simply left hanging – listening to the sound of silence.  Hopefully, Canaccord won’t forget me in the future.

Mind you, I didn’t have much luck with Flying Colours either.  I chatted to their online “can I help you?” chap, Stephen Murphy, and asked him what the fund and advisory charges were.  Murphy wanted to know why I wanted to know.  I explained I was writing an article on Flying Colours’ fees.  His reply was: “In regards to you writing an article around fund charges – we are not interested in featuring in an article as you are based in Spain – however, if you need further information around this you could contact Dani Greenfield on dgreenfield@flyingcolourswealth.com – she deals with the marketing side of our business.”  Why so secretive I wonder?

All this leaves us with a number of pressing, unanswered questions: