OMI has facilitated financial crime over a period of many years; stood by while innocent victims’ retirement savings were destroyed; paid huge commissions to an unlicensed (and illegal in Spain) firm of scammers; continued charging crippling fees while victims’ funds dwindled away; extorted early exit penalties from victims unfairly and unreasonably; failed to take any action to stem the torrent of huge losses of millions of pounds’ worth of retirement savings for many years.  And now it is failing to uphold the victims’ complaints.

OMI has been in receipt of a number of complaints (and will be in receipt of numerous further ones) regarding their negligence and facilitation of financial crime in offshore financial services.  OMI has not upheld these complaints – and indeed has neglected to grasp the extent of their own multiple failings and errors.

The existing complaints do relate to serious regulatory breaches and fraud – as well as failing to adhere to OMI’s own terms and conditions.  Much of the fraud was caused by the financial advisory firm: Continental Wealth Trust (which traded as Continental Wealth Management).  However, the firm’s fraud was only successful because OMI facilitated it.

The complaints submitted to date include:

OMI has also stated that the roles and responsibilities of all the parties involved with this fraud have got to be clarified.  However, OMI claims – entirely disingenuously – it does not want victims to get the feeling it is trying to distance itself from the grievances.

In order to address what it refers to as “concerns”, OMI has attempted to “explain” matters.  The use of the word “concerns” is obviously a really crass clanger on the part of OMI, since the victims are absolutely not just CONCERNED – they are furious, terrified and devastated at their dreadful losses.  Some victims are suicidal, and many have had their health seriously compromised.

OMI has described the EEIB as being held by the trustee for the benefit of a member of their pension scheme, enabling policyholders to hold a “wide range of investments in one tax-efficient product wrapper”.  OMI goes on to claim that policyholders and their investment advisers “have complete flexibility over the investments they place inside the EEIB”.

Some or all of the above may be true.  However, that does not make it right that OMI has allowed unlicensed advisers to place clearly unsuitable investments inside their wrappers.  Further, it does not make it right that OMI then stood by and watched the investments fail for many years AND DID ABSOLUTELY NOTHING EXCEPT KEEP ON TAKING FEES BASED ON THE ORIGINAL VALUE – AND NOT THE REDUCED VALUE OF THE FUND.

OMI claims that it reviews all investments to ensure they meet Irish regulatory requirements, and their own administration requirements.

If this is indeed true, it is a very serious indictment of the Irish regulator if their requirements are so appallingly lax.  What OMI seems to be claiming is that both the Central Bank of Ireland and OMI have such low standards that they will allow low-risk pension savers to have their retirement funds invested purely in high-risk, professional-investor-only structured notes.  If this is true, then the regulator is as bad as OMI in condoning an investment strategy which has no regard for suitability, liquidity, diversity and risk tolerance.

In fact, the Central Bank of Ireland has stated that it carried out a review of suitability requirements in 2017 and found that: “governance structures for the identification and treatment of vulnerable clients were absent or ineffective”.  The CWM victims were about as vulnerable as it was possible to get – as their retirement savings were systematically and inexorably destroyed.  And OMI’s governance structure was about as absent and ineffective as it is possible to get while it stood by and didn’t even bother to raise a red flag on the whole disaster as it unfolded.

There was no jangling of alarm bells as OMI watched millions of pounds wiped out.  There was no expression of concern that the same toxic structured notes which had failed in earlier years were bought again and again by the same unlicensed scammers.  There was no governance to protect new vulnerable victims from having their funds destroyed from 2015 onwards in the same way hundreds of victims had suffered in previous years.

OMI has claimed that customers/their appointed advisers are responsible for the suitability assessment and selection of the investments held in the policy – and that “it is important that customers read the prospectus/offering documents of investments carefully, before making any investment decisions”.  However, OMI watched wholesale destruction taking place inside its own wrappers and took no action.  Had OMI asked a few simple questions they would have found the following:

OMI claims that term 12 of the EEIB policy terms states that it is the policyholder who bears the risk of investment. But then OMI goes on to assert that the policyholder was the trustee who would be classed as a professional investor.

So OMI has got to make up its mind – it has already stated that: “customers/their appointed advisers are responsible for the suitability assessment and selection of the investments held in the policy”.  So who is the customer?  The victim or the trustee?  And whom did the adviser advise – the customer or the trustee?  Or OMI?

OMI goes on to refer to term 11.4 of the policy which confirms that it may allow investment into professional or experienced investor funds because it owns the investments held within the EEIB, rather than the policyholder.

So, who gave the advice and to whom?  OMI can’t seem to make up its mind who the customer is: the victim; the trustee or OMI itself.  If OMI is the customer, why is it charging the victim fees?

OMI goes on to quote policy term 11.4.1 – which apparently clearly highlights that professional-investor-only funds carry a high degree of risk. So who is taking the risk?  The victim, the trustee or OMI?

Let us ask ourselves, where did the original funds come from?  Not the trustee; not OMI; but the victim. 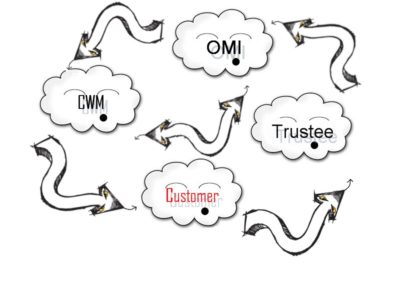 OMI then procedes to claim that it will “only accept applications via regulated financial advisers”.  But Inter-Alliance was not licensed to provide investment advice – or indeed insurance advice.  CWM was not licensed either.  So why did OMI accept applications from unlicensed advisors (who were also known scammers)?  Also, OMI failed to identify that tied (insurance) agents are illegal in Spain – so it shouldn’t have been dealing with them at all – let alone paying them huge commissions.

OMI states that CWM was a member of Inter-Alliance WorldNet, and obtained their authorization to act via that membership. But this is not true – Inter-Alliance was not licensed and therefore neither was CWM.  The application form may, in some cases, have confirmed the appointment of CWM as investment adviser with full discretion – but why didn’t OMI check that CWM was licensed?  In fact, most of the victims were under the impression that they would be consulted on the investments and that their risk tolerance would be respected – but this never happened in any of the cases.

OMI goes on to claim that CWM was able to submit investment instructions directly to OMI, without consulting the trustees.  But that isn’t true either: dealing instructions were sent to the trustees first, and then the trustees sent on new instructions.  How can OMI not even know how its own internal systems work?

OMI concludes that it is sorry the complaining investor is “disappointed with the performance of some of the investments selected by CWM” and then goes on to claim the investments “met the criteria for a permitted asset under the EEIB policy terms”.

OMI is now refusing to refund or waive early withdrawal charges on the basis that CWM was an appointed investment adviser.  This is because OMI initially paid a big chunk of commission to CWM – an unlicensed adviser and known scammer.  If a victim wants to get out of the toxic, pointless insurance wrapper, in order to put a stop to the exorbitant fees taken quarterly out of the fund – and based on the original value rather than the decimated value of the fund – he basically has to refund the commission OMI paid to the scammers.

The victims remain dissatisfied with OMI’s response, and the complaint is now being referred to the Irish Financial Services and Pensions Ombudsman. OMI has deliberately misunderstood and overlooked every aspect of the victims’ complaints and failed to address even the most basic issues surrounding OMI’s failures and negligence.

OMI has facilitated financial crime over a period of many years; stood by while innocent victims’ retirement savings were destroyed; paid huge commissions to an unlicensed (and illegal in Spain) firm of scammers; continued charging crippling fees while victims’ funds dwindled away; extorted early exit penalties from victims unfairly and unreasonably; failed to take any action to stem the torrent of huge losses of millions of pounds’ worth of retirement savings for many years.  And now it is failing to uphold the victims’ complaints. 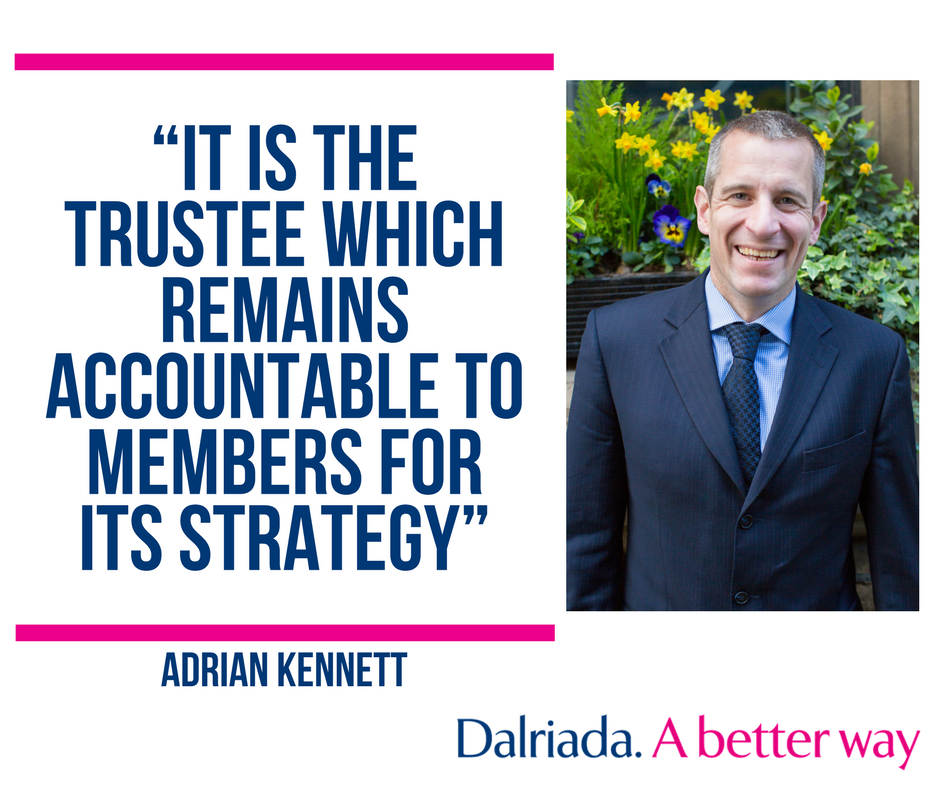