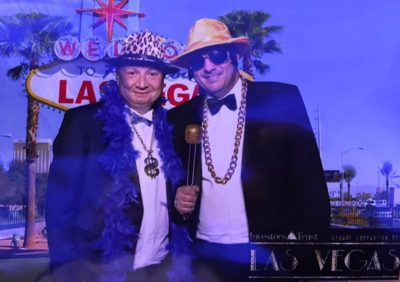 David Vilka of Square Mile International Financial Services has exactly the sort of lawyer one would expect: a scammer’s lawyer.  Unsurprisingly, this dope can’t even spell Vilka’s victim’s name and has referred to him as “Mr Sexton” as opposed to “Mr Sefton”.  But, again, this is no surprise.

What I must challenge, however, is the fact that Mr. Sefton has referred to this clown as a “two-bit lawyer”.  I really don’t think this is true – as he is a one-bit lawyer at best.  He has a couple of glowing client testimonials going back to 2016 and 2015 on his amateurish website, and displays no evidence of experience or expertise in the arena of British pensions (and why would he? – he’s purportedly practising US law in the US).

One might forgive Mr. Davies for not understanding anything about UK pensions in general and pension scammers like David Vilka in particular, but to immediately jump into a firm conclusion that there has been defamation against his client shows that he hasn’t even made a one-bit attempt to understand what his client has been up to – or how many lives (like Mr Sefton’s) Vilka has ruined.

I must admit I am used to dealing with a much better class of scammers’ lawyer.  Take DWF, for example: this large firm carelessly lost a team of 20 lawyers to rival Trowers and Hamlins a couple of years ago.  This wasn’t long after they were caught representing both sides in a case: the Insolvency Service in the winding up of Capita Oak, and Stephen Ward who handled the transfer administration in the same scheme.  But at least they dealt with the embarrassment of acting for both the poacher and the gamekeeper with a degree of dignity and elegance – a class act indeed.  DWF comes into the same league as my other legal chums – including Carter Ruck and Mishcon de Reya.  So, you can see I am more used to dealing with professional firms rather than twerps like this Mr Davies.

Mr. Davies is referring to the UCIS investment scam, Blackmore Global, which was illegally promoted to retail investors – and which is a fraud from start to finish.

Anyway, I have answered his absurd email below with my usual comments in bold.

Re: Defamation of Mr. David Vilka and Square Mile International

I am an attorney You may well be, but you are clearly a US attorney – and that does not qualify you to deal with a matter which involves UK pensions

published on your on-line site. Specifically, this complaint relates to the misstatements and misrepresentations made on

If I might sum up, each and every defamatory allegation with regard to Mr. Vilka and Square Mile International you assert are sourced to one disgruntled individual, Stephen Sexton, none of which allegations are supported by any evidence whatsoever.  Wrong.  Mr. Sefton is one of a number of victims of Vilka’s scams – many of which were invested in the same toxic, illegal UCIS fund as Mr. Sefton – Blackmore Global – and others were invested in other similar investment scams.  Blackmore Global is run by another scammer, Phillip Nunn, who – along with his partner in crime Patrick McCreesh – ran the cold calling and lead generation services for the Capita Oak and Henley pension scams, now under investigation by the Serious Fraud Office.

Mr. Sexton was an unsolicited client of Mr. Vilka and Square Mile who had a substantial pension and for personal reasons of his own wanted to switch his pension and draw down sums for his personal use.  When he says “unsolicited” he means not cold called, as was usually the case with Vilka.  Vilka lied about being regulated to provide pension and investment advice, and the rest is history: Mr Sefton’s life savings were invested in two UCIS funds which were habitually promoted by Vilka: Blackmore Global and Symphony.

The switch in pension plans resulted in what Mr. Sexton felt were unreasonable fees (None of which went to Mr. Vilka or Square Mile). I wonder if this idiot would like to explain why Mr Sefton was put into a QROPS when he was a UK resident?

And despite the fact that Mr. Vilka was able to personally intervene and get Mr. Sexton’s monies returned less a nominal fee, Mr. Sexton continued to complain and when Square Mile attempted to make up even this nominal fee on its own part, Mr. Sexton continued to complain because he refused to sign a boilerplate settlement agreement containing a standard confidentiality agreement.  It is true that Mr Sefton did, eventually, get around 85% of his original investment back – but only after a dogged fight which was backed up by the pension trustees Integrated Capabilities.  There was no intervention by Vilka.

In your post on the Blackmore Fund you have the temerity to cast defamatory aspersions on Mr. Vilka and Square Mile based on your “strong suspicion” and you go on to assert they must have a “strong vested interest in promoting this black hole of a fund.”  Why else would scammers such as Vilka promote such a fund?  It is a UCIS, with no independent audit to verify whether the purported assets even exist.

Really? What proof of that would you have?  Vilka must have had a very strong reason to promote the Blackmore Global investment fraud – why else would he have invested a further 64 victims’ pensions in this UCIS?  This was a bunch of people he scammed into transferring their pensions to a Hong Kong QROPS.

And since you have none, we demand you remove this article and/or any reference to Mr. Vilka or Square Mile.  I have plenty of evidence thank you.

Let me advise you that Mr. Vilka and Square Mile, contrary to your specious aspersions, are heavily regulated as is the industry.  “Heavily”?  What you actually mean is that neither Vilka nor Square Mile is regulated for pension or investment advice – only insurance mediation.

The Sexton matter was thoroughly investigated at the time by the appropriate regulators who found no irregularities.  You don’t know that.

Mr. Sexton is not nor was he a perplexed victim of Mr. Vilka or Square Mile. He most certainly was – as Vilka and his accomplice John Ferguson know full well.

His pension is worth well over half a million pounds. No it isn’t.  Did you do maths at school?

He read and signed multiple acknowledgements before he switched pensions showing very clearly that he knew what he was investing in and the inherent risks involved.  No he didn’t.  It was never disclosed that the scammers were going to invest his pension in a UCIS fund which is illegal to be promoted to retail UK investors.

And again, significantly, he was not cold-called. He sought out Mr. Vilka and Square Mile. Nor did Mr. Vilka or Square Mile receive any payment from the Blackmore fund or its partner firms regarding Mr. Sexton’s transaction as confirmed by the Czech National Bank which has direct access to Square Mile’s company bank accounts via an electronic data box.  Are you talking about the accounts which haven’t been updated since 2014?

In sum, there is no bases whatsoever for the specious and actionable statements you make in your referenced post with regard to Mr. Vilka and Square Mile International.  I think you mean basis – and yes, there is a solid basis for all the statements I made in my post and not a single one of them is “specious” (although I am amazed you have even heard of the word).

Your comments have caused Mr. Vilka and Square Mile reputational damage, among others, and you are hereby instructed to delete the post immediately.  I sincerely hope that the impact of my blog has caused Vilka and his accomplice Ferguson to turn over a new leaf and arrange to pay compensation for Mr. Sefton and all their other victims who have lost part or all of their pensions to the Square Mile scams.

Your failure to do so will result in further damages to Mr. Vilka and Square Mile International, the accrual of further legal fees and costs, and the likelihood of litigation, all of which damages and costs we will recover from you.  Good luck with that.

If you have any questions or concerns or require further information, please don’t hesitate to contact me directly at (206) 319-3533. I look forward to confirmation of the removal of the identified defamatory materials. Thank you in advance for resolving this matter expeditiously.  I have no questions, other than to enquire as to when your client intends to pay redress for the losses caused by his fraud. 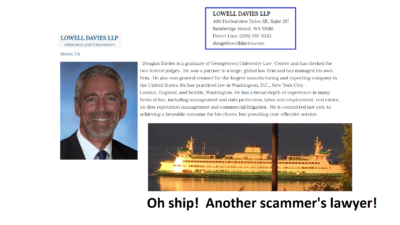