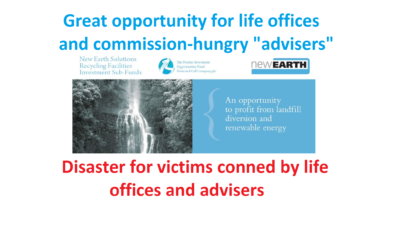 Premier New Earth Recycling and Renewables PLC (in liquidation) is being wound up by Deloittes.  Joint liquidators Alexander Cameron Adam and David Peter Craine have written to shareholders to say the directors of NERR aren’t being terribly helpful.  Apparently, they are refusing to cooperate with the investigation into why the company failed and are insisting they will only answer questions put to them in writing.  Disappointing, perhaps, but not really surprising – scammers rarely “cooperate”.

NERR was a typical investment scam from the outset.  The fund was highly speculative, with underlying assets mostly made up of smoke and mirrors, and a bit more smoke (plus quite a bit of rubbish).  But to be fair, the published accounts did draw attention to the inherent high risks of the venture failing.

The fund’s assets were equity and unsecured loans in three UK companies:

When the liquidators got called in, they valued the investments at “close to nil”.  In fact, the only value was probably the paper that the depressing accounts were printed on.  Deloittes will, apparently, be trying to uncover why NERR was NEVER going to do anything other than collapse.  So that will require a bit of sleuthing to find out who and what was responsible.  The liquidators have applied to the court to have the directors questioned under oath.  But the directors – who have undoubtedly made a packet out of this scam – will be able to afford top-class lawyers who will help them muddy the waters.

Deloittes have made the usual “we are limited in what information we can share so that we do not prejudice any potential claims” disclaimer to the distressed shareholders.  But I find it worrying that Deloittes is being used at all for this job.  Deloittes was used to inspect the books and records of STM Fidecs in Gibraltar – and they must surely have uncovered the massive fraud involved in the Trafalgar Multi-Asset Fund (under investigation by the Serious Fraud Office).  But no action was ever taken against STM Fidecs.  So I am not optimistic that Deloittes will do anything other than push a bit of paper around a desk and submit eye-watering fee invoices.

The Isle of Man Financial Services Authority is paying Deloittes’ fees for the liquidation.  For now.  However, if the IoM regulator had done its job properly in the first place, they could – and should – have prevented this scam and avoided so many thousands of investors losing their shirts.

Read the published accounts for the NERR Group of companies – and I think you’ll agree this was obviously a dodgy investment right from the start.  These accounts were prepared by BDO Stoy Hayward – and you’d have thought they would have known better than to fail to blow the whistle on this collection of companies which was, quite frankly, always bound to fail (at best) and an outright scam (at worst).  The writing was always on the public domain wall. 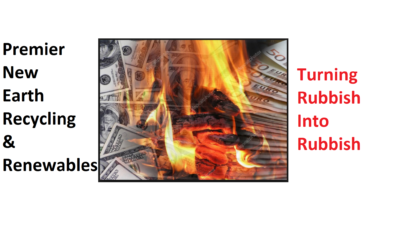 However noble, environmentally friendly and ethical the concept of turning rubbish into clean energy may sound in theory, this commercial venture was never commercially viable.  In fact, looking at the ever-increasing gross losses from 2008 to 2014: from £0.3m in 2008 to £7m in 2014 – and a total spent on “admin costs” of £14.3m – any half-decent accountant or auditor would have blown the whistle long before 2016. 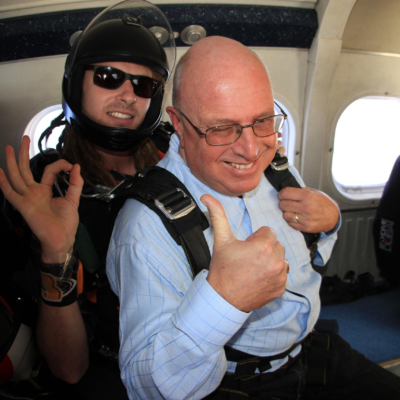 The name “Premier” will, of course, strike a chord with victims of Stephen Ward’s Premier Pension Solutions.  Since at least 2010, thousands of victims have lost their pensions to Ward.  However, in this case there seems to be no link between the Premier Group investment scam, and Ward’s Premier Pension scam.  However, one of Premier Group’s other scams – in addition to the recycling scam – was the Eco Resources Fund which invested in bamboo plantations in Nicaragua.  Which sounds awfully similar to the Reforestation Group fund that Ward was peddling in the London Quantum pension scam.  This fund was purportedly based on Brazilian eucalyptus trees and land used for plantations.  Only it seems there were no eucalyptus trees.  And no land.

In total, around 3,250  investors lost almost £300m in the Premier Group investment scam.  A great shame it took the Isle of Man regulator eight years to figure out what was going on under its own nose.  But then the regulator has a long track record of ignoring financial crime and those who facilitate it – and ignoring it is the same thing as encouraging it.  Personally, I would put the IoM regulator in the same category as the Gibraltar regulator: inept and bent – taking no action against scammers or those who facilitate scams.

The Premier Shareholder’s Group, a campaign group for investors, said Premier Group had paid large commissions to “unqualified and unlicensed” introducers to target pensioners by promoting their funds to low-risk investors.  This campaigning group also claims investors were locked in with “punitive” exit fees, often as high as 30%, which they were not told about when they signed up.

Former director of Premier Group – John Bourbon – has apparently denied accusations of mis-selling and mis-representation and is quoted as saying: “It is highly unlikely that anybody could have a significant investment in Premier Group without understanding the risk”.  He has also insisted all fees and charges were clearly set out in the offer document that investors were required to sign to confirm their status as “experienced investor”.  Bourbon has also moaned that the regulatory action was “something of a witch hunt”.

So, in summary, you’ve got all the same old same old symptoms of yet another scam:

Until and unless regulators and crime enforcement agencies make an example out of the scammers who operate such investment scams, nothing is going to change.  And until and unless life offices such as Old Mutual International are sanctioned for offering such scams, unscrupulous and commission hungry “advisers” are going to keep on peddling such toxic wares to unsuspecting victims.

The one thing that could stop these kinds of scams from getting off the ground would be to ban commissions offshore and mirror the principles of British RDR.  Financial advice can never be truly independent if commissions are payable – whether for useless, expensive insurance bonds, or toxic, expensive investment funds such as Premier New Earth Recycling and Renewables (NERR).