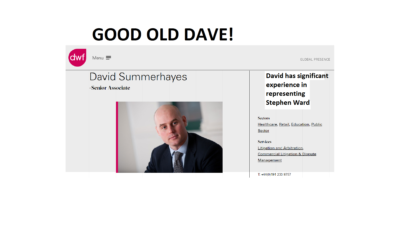 DWF’s clever PR chaps have come up with some impressive words to sell this law firm’s services: “We connect expert services with innovative thinkers across diverse sectors wherever our clients do business.”

They even reach as far as the Spanish village of Moraira where Stephen Ward plies his evil trade.

DWF is clearly a big firm (albeit, size isn’t everything).  However, one of their most senior litigation teams (twenty senior lawyers) upped and left a couple of years ago to join rival law firm Trowers and Hamlins.  These guys obviously didn’t make the leap because things were going swimmingly at DWF – and clearly, they felt no loyalty to their previous employers.  Either they were leaving a ship with a hole in the hull the size of Manchester, or they didn’t want to be associated with a firm that happily represented fraudsters.

So how do I know DWF?  One of their nice lawyers, David Summerhayes, threatened to sue me for defamation when I exposed some of the frauds perpetrated by his client, Stephen Ward of Premier Pension Solutions.  Dear Dave got straight to the point in a letter to me on 8.5.2014: 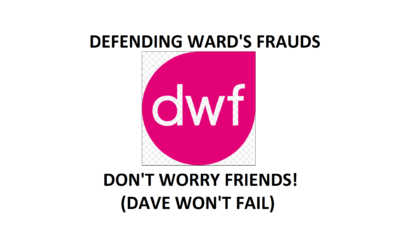 “We act on behalf of Mr. Ward, who trades as Premier Pension Solutions (“PPS”). Our client has become aware of many statements in which he is identified, both personally and through PPS, which contain false and defamatory allegations about him and his conduct. Of particular concern are the statements which convey an imputation of criminal conduct and fraud. The statements our client complains about convey the imputation that our client is guilty of criminal conduct and fraud. This is wholly false and highly defamatory of our client. The publication of these words has caused and is likely to cause serious harm to the reputation of our client.

In light of the above, we now require urgently from you:

1. Identification of where else you have published defamatory statements or similar allegations
2. Your agreement to withdraw the defamatory allegations and undertake not to repeat them
3. Your agreement to provide our client with an apology which shall be published on Facebook
4. Your proposals to pay an appropriate sum of damages to compensate our client for injury to his reputation

In light of the seriousness of the matter, the on-going damage which is being caused to our client’s reputation and the simplicity in which these issues can be redressed, we require that you remove the defamatory allegations and respond with your suggested wording of apology by 4 pm on 22 May 2014.

To be fair to Dave, he probably wasn’t aware at that point just how many thousands of lives his client Stephen Ward had ruined or how many £ millions worth of life savings he had destroyed.  But in the intervening four and a half years, you’d have thought that Dave might have done a bit of research on his client.  And told some of his mates at DWF what Ward has been up to. 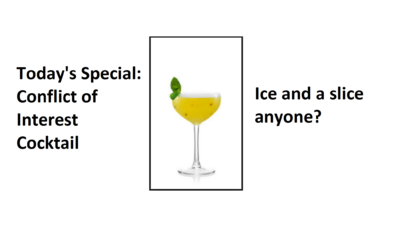 Moving forward to 2018, we now have the announcement that DWF is acting for the Insolvency Service in the matter of the winding up petition against Store First scheduled to be heard on 15 April 2019 at the Manchester District Registry of the High Court.

Three hundred victims of the Capita Oak pension scheme were defrauded into transferring their pensions and having them 100% invested in Store First store pods.  A bunch of crooks – many of which are now under investigation by the Serious Fraud Office – set up this scam and mercilessly relieved the victims of their life savings.

Store First is a company based Up North where they talk funny.  They make buildings that store stuff (kind of does what it says what it says on the tin).  Funny thing is, when you put your stuff in a Store First store pod, you can take it out again whenever you like.  However, when you put your pension in one of Stephen Ward’s pension schemes, that’s the last you ever see of it. 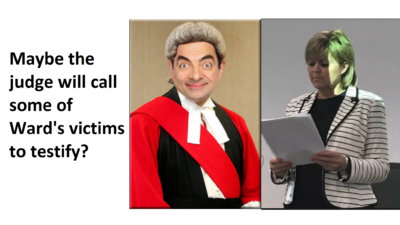 So just to show Dave Summerhayes there are no hard feelings about his unfriendly threats to me back in 2014, I’m going to give DWF a few friendly hints as to how they might approach their case in the High Court in April 2019.  I’m going to be generous because I wouldn’t want them to look silly – so here are some points they might want to mention to the judge:

Q: Who produced the Capita Oak trust deed and rules?

Q: Who knew for certain that all 300 Capita Oak victims were doomed to lose their pensions?

Q: Who advised XXXX XXXX  how to deal with ceding provider reluctance after the Pensions Regulator’s Scorpion warning?

Q: Who registered the “sister” scheme to Capita Oak – Westminster (now under investigation by the SFO)?

I am beginning to wonder if DWF stands for: “Defending Ward’s Fraud”.  Conflict of interest anyone?

4 thoughts on “DWF Solicitors and their client Stephen Ward”