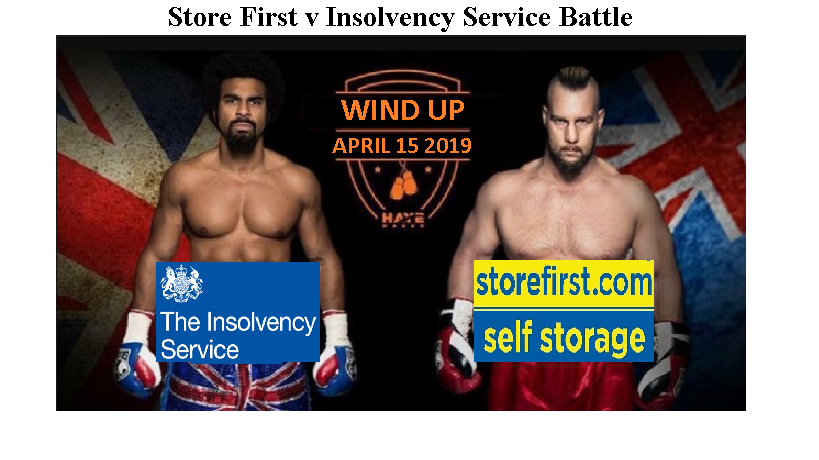 You can read the Insolvency Service’s witness statement here.

As a result of the Insolvency Service winning, 1,200 pension scam victims will probably lose the majority of their investments in Store First.  In most insolvencies, there is little left after the various snouts in the insolvency trough have had their fill.  Investors will be lucky to get 10p in the pound.  If there’s an “R” in the month.  And if it is snowing.  And if Brexit has a “happy ever after” ending.

The Insolvency Service says it is “in the public interest” to wind up Store First.   But are they right?  Isn’t winding up the company going to do even more unnecessary damage?

This impending legal battle (which will cost the taxpayer £millions) is riddled with many more questions than answers.  Here are a couple of my questions:

The reason for my questions is that both HMRC and tPR were negligent in registering the two occupational pension schemes.  This was because the schemes were obvious scams from the outset.  They both had non-existent sponsoring employers which had never traded or employed anybody.  And they weren’t even in the UK.

HMRC was blind, stupid and lazy at the start – when these two schemes were registered by known scammers.  But several years later, HMRC woke up pretty smartly and sent out tax demands for the “loans” the victims received.  The Store First v Insolvency Service Battle is probably doomed to ignore HMRC’s negligence in causing this disaster in the first place.

James Hay and Suffolk Life had been facilitating the Elysian Fuels investment scam at around the same time.  And this was with the considerable “help” of serial scammer Stephen Ward.  So, this was a prime time for scams and scammers.  However, both HMRC and tPR failed the public back then and have continued to do so ever since.

In 2015, the Insolvency Service identified and interviewed most of the scammers behind the Store First pension scam.  In their witness statement dated 27th May 2015, Insolvency Service Investigator Leonard Fenton cited statements and evidence from all the key players.

That is fifteen scammers who have never been prosecuted.  They have not only never been brought to justice, but many of them went on to operate further scams and ruin thousands more lives – destroying more £ millions of hard-earned pension funds.

All the above are routinely used and abused by pension scammers as “investments” for some dodgy scheme.  Invariably, the above investments come with pension liberation fraud and/or huge introduction commissions and hidden charges.  However, it is rarely the fault of the artist, wine maker, start-up entrepreneur, truffle farmer or property developer that the scammers profit so handsomely from abusing their products.

I hope Store First defeats the Insolvency Service in the forthcoming battle in the High Court this month.  And I hope that the public and British government will finally get to see what embarrassingly inept, corrupt, lazy regulators and government agencies we have.  I will publish the Insolvency Service’s witness statement separately for anyone who wants to read the Full Monty.

Let us not forget that the solicitors acting for the Insolvency Service – DWF LLP – also act for serial scammer Stephen Ward.  It was Ward who was responsible for the pension transfers which subsequently invested in Store First.  Had it not been for him, 1,200 victims’ pensions totaling £120 million wouldn’t now be at risk.  But, somehow, DWF LLP doesn’t think that is a conflict of interest?!?