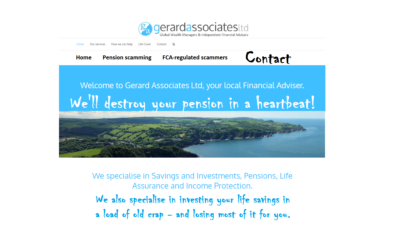 Gerard Associates – an FCA-regulated firm – makes the case for regulating the “profession” of scamming.

One of Gerard Associates’ victims, a Police officer, complained to the Financial Ombudsman.  He had been scammed out of his Police pension and into the London Quantum pension scam by Gary Barlow of Gerard Associates and Stephen Ward of Dorrixo Alliance and Premier Pension Solutions.  But, as scamming is not a regulated activity, the complaint could not be investigated.

It goes on to explain why Gerard Associates should be chosen as an advisory firm:

“Everyone’s financial situation has different individual needs and requirements. As an impartial financial expert we are well placed to provide our clients with a bespoke service that works in your best interests, not ours.” 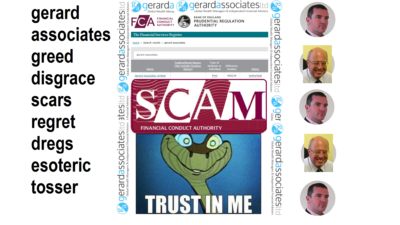 But who exactly are Gerard Associates’ clients?  The firm was working for Stephen Ward and his Premier Pension Solutions firm back in 2010, introducing victims to the Ark pension liberation scam.  Perhaps the firm – led by Gary Barlow – was busy with non-scamming activities between 2011 and 2014.  Or perhaps not.  What we do know for sure is that in 2014, Gerard Associates plunged into Stephen Ward’s final scam: London Quantum.

Gary Barlow should have known the simple fact that everyone’s needs and requirements are actually identical: i.e. they need to avoid being scammed.  And yet Barlow was happy to support Stephen Ward in his quest to scam further victims out of their pensions and act as a sort of financial adviser who claimed he didn’t give any financial advice.

“Whether you want a professional to manage your investment portfolio and free you up to enjoy your wealth, or you are simply looking for a little guidance, we are able to help.”

I wonder if victims would really want a “professional” who cons people out of their pensions – including final salary pensions.  And how do people “enjoy” their wealth when it is invested in all sorts of high-risk, illiquid, speculative crap that only serves to pay the scammers high commissions?  The only “help” potential victims of Gerard Associates need is to avoid this firm like the plague.  Nearly 100 people lost their pensions to the London Quantum scheme – facilitated by this rogue firm.  Correction, this rogue FCA-regulated firm.

“By letting us look after your financial planning needs, you pass the responsibility onto us and save yourself valuable time, sometimes money.“

I think the London Quantum victims would argue with this “promise”.  Far from saving them valuable time and money, these victims spent at least three years agonising over the loss of their pensions and waiting for news that the Pensions Ombudsman would uphold their complaints that their ceding providers should be brought to justice for negligently transferring their life savings to a scam.

“This is because your impartial financial adviser will have access to a wider range of products than you get from high street banks or comparison websites.”

What Gerard Associates actually means is that the “wider range of products” includes the usual load of rubbish that pays the scammers high commissions (such as eucalyptus plantations, forex trading, Dolphin Trust unsecured loan notes, collapsible flats in Cape Verde, and mythical Middle Eastern business centres).  The reason that high street banks don’t offer such toxic investments, is that they don’t want their customers to be financially ruined.  Obviously, Gerard Associates has no such reservations.

In August 2014, a Police Constable (Mr. N) from the North East of England received a phone call from an unregulated “introducer” called Viva Costa International, and was referred to Gerard Associates who advised him to transfer his Police (final salary) pension to the London Quantum Retirement Benefit Scheme.  This was an occupational scheme – and Mr. N had no employment relationship with London Quantum (which is now in liquidation – surprise surprise!).

The London Quantum scheme was administered by Stephen Ward’s company, Dorrixo Alliance (UK) Limited – and Dorrixo was also the trustee. Gerard Associates obtained a cash equivalent transfer value (CETV) quotation from the providers of Mr. N’s existing pension fund – the Police Authority.  At this point, Gary Barlow of Gerard Associates should have advised Mr. N – and all the other victims – that under no circumstances should they transfer their valuable and safe existing pensions to the London Quantum scam as they would be bound to lose most – if not all – of their funds.  But, of course, Barlow was paid handsomely by Ward to help scam Mr. N and all the other victims.  And Barlow earned £5,000 out of Mr. N’s transfer alone.  And with almost one hundred victims in total, Barlow would probably have earned close to half a million quid out of the London Quantum scam.

On 26 June 2014, Mr. N met Gerard Associates to discuss his pension transfer, and signed an agreement to transfer his benefits from the Police pension scheme to London Quantum. At no point did Gary Barlow of Gerard Associates warn Mr. N that Stephen Ward, the trustee, was a known scammer with a history of scamming hundreds – probably thousands – of victims out of their pensions.

On 15 August 2014 – long after the Pensions Regulator’s pension fraud warning (Scorpion) was published (Valentine’s Day in 2013), Mr. N received confirmation that £112,077.66 had been transferred from the Police Scheme to London Quantum. Gerard took their fee of  £5,000 for “advising” on this scam out of the transfer payment. 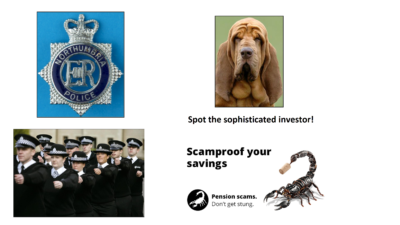 In 2015, Mr. N looked again at his London Quantum documents, and was realised he’d signed up to a high-risk investment as a “sophisticated” investor. He scratched his head and wondered what a “sophisticated investor” was.  Alarm bells started ringing loudly in his head – especially as news of Stephen Ward’s involvement in the Capita Oak pension scam started to get into the public domain.

On 18 June 2015, Dalriada Trustees Limited (Dalriada) was appointed by the Pensions Regulator as an independent trustee to London Quantum. Dalriada then published the list of assets in the London Quantum scheme and Mr. N realised the true horror of where his pension had been invested:

A high-risk forex-trading fund.  Fun for currency traders to lose a bit of pocket money during their coffee break, but totally unsuitable for a pension fund.  The fund sponsor predicted a return of 12%-15% per annum – an astonishing amount by any standards.  But in practice, the fund – of course – performed badly and lost a lot of money.

Stephen Ward bought nine five-year-term loan notes with no early exit options. Dolphin is a German outfit that claims to buy and renovate derelict listed German property.  The lenders are promised rates of return ranging from 12% to 13.8% per annum.  This is an unregulated investment and is high risk in nature, with no guarantee that the capital and interest will ever be fully repaid.  Also, there has never been an independent audit – so there is no proof that the properties even exist or that this is anything other than a Ponzi scheme.

This was a social media app called VIP Greetings providing personalised messages and celebrity endorsements. Another long-term, high-risk, speculative, unsecured investment with no early exit options and no secondary market for selling it on.  When Dalriada took it over, they suspected it was actually worthless.

Between 2014 and 2015 Stephen Ward invested in 17 car parking spaces in a car park near Glasgow Airport.  An entirely unsuitable investment for pension schemes, although jolly handy for people flying from Glasgow Airport and wanting to guarantee the best parking spot.

On 20 August 2013, Stephen Ward invested in an unsecured loan note issued by the law firm Malletts Solicitors Limited.  The loan note had an investment period of 6 years with an obligation for the note holder to redeem 25% of the note per annum after year 2. No early exit options existed.  The loan note purported to return 8% per annum payable half yearly.

Malletts Solicitors Limited went in liquidation on 11 November 2016. Dalriada submitted a proof of debt respect of the loan note but the fact it has gone into liquidation suggests the money is gone.  Before Malletts had gone pop, it had been representing one of the Ark victims who had been scammed by Stephen Ward.  Read into that what you will!

On 31 January 2015, Stephen Ward invested London Quantum funds in a three-year corporate bond with Colonial Capital Group Plc. Colonial operates in the distressed US social housing market and has issued a number of bonds.

The corporate bond is for a period of three years. No early exit options exist.  The bond has a fixed return of 12% per annum. Interest will be rolled forward and paid at the end of the three-year investment period.

This is an unregulated investment which is illiquid and high risk.  Colonial Capital Group Plc was then placed into administration on 8 March 2017. So all the money is probably lost.

There’s a reason why Cape Verde properties are called “flats”!   Investors do not own the land nor do they have a charge over it. An investor has simply a right to share in any profit generated from the occupation of the properties.  This is an unregulated investment scheme which is illiquid and way too risky for any pension scheme.

This scheme claimed to have purchased ‘land rights’ to 21 plots of Brazilian farmland for growing eucalyptus trees. The investment term is 21 years – covering three cycles of seven years, which is the projected time period to grow and harvest the trees. The investment purportedly offers returns of 28-32% compounded over each seven-year cycle.

The crop cycle of a eucalyptus tree is seven years. With the investment being made in 2014, the first return on this would not be realised until around 2021.  And that is assuming the trees didn’t die – or that the land existed at all.

ABC LLC is wholly owned by another UAE entity, the Property Store. The Property Store purportedly provides security of 200% of the value of the invested funds.  If you’ve followed that little lot, you’ve probably concluded it should have been avoided at all costs.

This unregulated investment consists of a “lease” on seven car parking spaces in a new office development in Dubai taken out between 1 October 2014 and 17 April 2015.  Under the Operator’s Agreement, there is five years’ worth of s0-called guaranteed rental income.  The car parking spaces are located at Churchill Towers, Dubai – where NCP Ltd owns the freehold.  Best Asset Management should probably be renamed “Worst Asset Mismanagement”.

Mr. N complained about Gary Barlow’s advisory firm Gerard Associates to the Financial Ombudsman Service. In January 2016, this complaint was rejected as being outside the Financial Ombudsman Service’s jurisdiction on the basis that no regulated activity had been carried out by Gerard.  Gerard’s position was that it had not given advice to Mr. N.  And, of course, scamming isn’t a regulated activity so the ombudsman can’t investigate it.

And this is why I maintain that scamming should be a regulated activity – so that the Financial Ombudsman Service can deal with such complaints.

In 2016, Mr. N complained to the Pensions Ombudsman about the Police Authority’s negligence in allowing the transfer to an obvious scam run by a well-known scammer (Stephen Ward).  Back in 2014, Gerard Associates had conned Mr. N into signing a declaration that he was a sophisticated investor and was looking for a high-risk investment strategy. He was told that Gerard Associates – an FCA-registered company – would find the best pension for him.  Of course, what he didn’t know was that Gerard Associates had only one solution: the London Quantum scam run by Stephen Ward.  And, naturally, Gerard Associates was certainly not “independent” as it was only out for the eye-watering commissions it would earn from scamming victims such as a serving police officer out of his pension.